The World Summit of Local and Regional Leaders begins!

The aim of the World Summit of Local and Regional Leaders is to promote dialogue, to place local government voices on the world stage and to co-create, with our communities, the tools to influence the global policy agenda, says the United Cities and Local Government (UCLG) President Parks Tau.

"We see all agendas as a common agenda. We cannot read the New Urban Agenda without reading Goal 11, you have to read them as a continuum of global goals. And to address them, we need to do so from the local level. Bear in mind that it is the mayor that stays in the city. The people that have to contend with the issues are those that are on the ground. Our local leaders" Parks Tau, President of UCLG.

Speaking during the Media Briefing session held at Inkosi Albert Luthuli International Convention Centre, Durban on Monday, 11 November 2019, ahead of a week-long World Summit, President Tau has called for cities of the world to work together and stimulate one another to transform territories and communities through local action and efforts.

President Tau told journalists that during his three-year long term as the President of the UCLG, cases of Mayors finding themselves at odds with their very own nations became very common, in some instances Mayors were arrested for simply acting on their functions and obligations. For some time local governments have called for a seat at the international negotiating table reserved only for states, calling for them to listen to cities.  The UCLG Congress 2019 also aims to provide for dialogue between the different spheres of government as well as between governments and communities, promoting local efforts in conflict prevention.

Jointly hosted by the South African Local Government Association (SALGA) and eThekwini Metropolitan Municipality, the UCLG Congress 2019 week-long program taking place from 11 to 15 November 2019, the event brings together global leaders, mayors, councillors, professionals representing towns, cities, metropolises and regions, civil society and experts and academia with the aim of establishing links and developing policies that transform society and the way local governance works for and by the people.

Monday 11 and Tuesday 12 are dedicated to events dedicated to exchanges, preparatory meetings and high-level special sessions. The Summit will be officially opened on Wednesday 13 November, which also marks the beginning of the more political days of the Congress.  Thursday and Friday will also see the election and inauguration of the new UCLG Leadership which will serve for the next three years.

The five day programme kick-started with the media briefing session which was addressed by the President Tau, who is also the Deputy Minister of Cooperative Governance and Traditional Affairs in South Africa, together with  the General Secretary of UCLG Ms Emilia Siaz, the Deputy President of South African Local Government Association (SALGA) Mr Sebenzile Ngangalizwe and the Mayor of eThekwini, Councillor Mxolosi Kaunda.

The briefing focused on the work done and achievements of the current leadership since their appointment in the last UCLG Congress that was held in 2016, in Bogota, Columbia.
President Tau also expressed his confidence that eThekwini metro, supported by SALGA,  will deliver the best congress ever and its outcomes will assist to build on good foundation and work laid by the Bogota 2016 elected leadership.

Other highlights of the day included Local4Action HUB and panel discussion titled “Mayors of the Future”,  with emphasis on the multidimensional leadership approach required for local government. The 2019 African Forum for Urban (AFUS) also hosted a Learning Exchange-Global Conversation, which drew participants from UCLG Africa, eThekwini Municipality, Department of Human Settlements of South Africa, SALGA, South African Cities Network (SACN) and UN-Habitat). The conversation touched on insights from the AFUS Technical Advisory Council research report that seeks to provide data which cities use to make evidence-based policy decisions. The report provides context to the violence against women and girls and offers an understanding of the environmental and social factors that have created and sustained gender-based violence in communities that have endured war and conflicts.

Until the coming Wednesday, sectoral engagements will continue. These will include a Cities Panel on the UCLG Gender Strategy in Practice: How to advance gender equality at the local level. Delegates will also have an option to participate in a Global Conversation on Raising National Ambition Climate.

Delegates continue to arrive ahead of the official opening this coming Wednesday, 13 November. Accreditation is still open to participants who had completed the online registration. Members of the media who have not applied for media accreditation are requested to do so before 13 November 2019.

United Cities and Local Governments (UCLG) is the global organization of local and regional governments and their associations that represents and defends their interests on the world stage. Representing 70% of the world's population, UCLG members are present in all world regions: Africa, Asia Pacific, Europe, Eurasia, Middle East-West Asia, Latin America and North America - organised in seven continental sections, a metropolitan section and a regional forum. This network covers more than 240,000 cities,regions and metropolises and more than 175 local and regional government associations present in 140 countries. UCLG includes among its main areas of political interest local democracy, climate change and environmental protection, the achievement of Sustainable Development Goals, local finance, urban development and city diplomacy for peacebuilding. 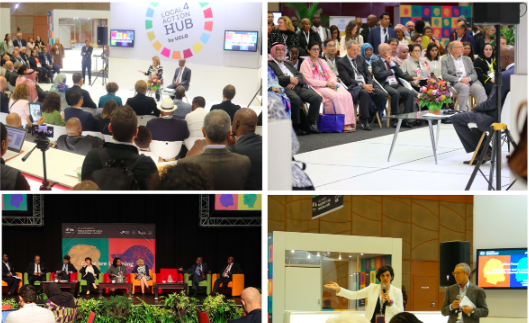